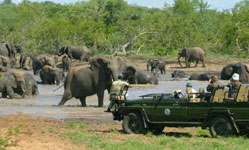 Most Southern African Countries will entertain its tourists on a wildlife experience that will be remembered for life (and probably be the start of a series of re-visits).

South Africa, however, may rightly be proud of the exceptional blend of attractions for it's tourists, ranging from the wildest African safari's to the cheekiest urban entertainment (a blend that few, or none, of it's neighboring countries could meet).

It's beaches, mountains, open spaces, African bush and modern cities, combined with it's well-maintained tourist industry, made it the logical choice for millions of satisfied tourists over many years.

Lately, with the exchange rate (against most developed countries) being as it is, South Africa can host most foreign tourist in glorious style without hurting their budgets too much.

In the South African bush alone you will find more mammals than those of the Americas together, more wild plant species than the United States, both smaller and bigger animals, almost a thousand bird species, a number of the very largest cats in the world, the largest antelopes in size, numbers and in variety. Of course, you'll also find the biggest and most dangerous of all animal creatures in South Africa, with the elephant, lion, rhino, hippo, leopard, buffalo and some very interesting reptiles in the country.

This country, with it's rainbow of people-groups (and eleven official languages), it's first world standards and it's undiscovered open countryside, is truly the place to have an out of this world holiday and hunting experience!